http://www.ladailypost.com/content/lahs-key-club-hears-famine-feast-presentation
Submitted by Carol A. Clark

Famine to Feast is hosing a “Secret Santa” event through Christmas Day.

Community members are invited to donate a gift to a person or family in need. This can be done anonymously or with the donor’s identification attached.

Many people know of someone less fortunate and in need of used winter clothes, holiday ornaments and more, or perhaps just want to give this holiday season but don’t know who go give to. Famine to Feast can help. The nonprofit organozation is performing “Secret Santa” activities through Dec. 25.

“We are completely amazed by the items that have already been donated and thank the community for the food, warm clothing, blankets and cash donations,” co-founder Jaret McDonald said.

Famine to Feast welcomes suggestions of local people in need of items at www.faminetofeastnow.org

by Carol A. Clark
Famine to Feast is hosing a “Secret Santa” event through Christmas Day.

Community members are invited to donate a gift to a person or family in need. This can be done anonymously or with the donor’s identification attached.

Many people know of someone less fortunate and in need of used winter clothes, holiday ornaments and more, or perhaps just want to give this holiday season but don’t know who go give to. Famine to Feast can help. The nonprofit organozation is performing “Secret Santa” activities through Dec. 25.

“We are completely amazed by the items that have already been donated and thank the community for the food, warm clothing, blankets and cash donations,” co-founder Jaret McDonald said.

Famine to Feast welcomes suggestions of local people in need of items at www.faminetofeastnow.org

Do you know of an individual or family who could use food or clothing or a gift this Christmas, but you do not want to embarrass them by bringing the items to their door? Or perhaps you have a warm blanket or coat you would like to pass on to a homeless person but do not know how to go about that.
Famine to Feast will do that for you. The 501c 3 organization has designated Dec. 16–25 as “Secret Santa” time.
“We’re always looking for ways to try to help our community. And in keeping with what we do, we try to facilitate…it doesn’t always have to be food,” co-founder Jaret McDonald said.
Famine to Feast is dedicated to getting food and other donations from donors to where they are needed.
“But this is the time of year when we’re not really busy because we’re an instant food type of donation,” McDonald said, noting that during the Christmas season most people save their food to contribute to food drives.
So instead of an “instant donation” to a food bank or another charitable organization, Feast to Famine decided to play “instant Santa.”
The concept is that those wishing to donate or make an anonymous gift to someone in need can contact Famine to Feast through its website or their Apple app and say, “I would like to donate xxx to so-and-so, or to this organization.”
Famine to Feast will pick the items up and see they get delivered, allowing the donor to remain anonymous.
“So maybe you want somebody to have something special for Christmas, or you know of a family that’s in need and you want to be anonymous. Say you have a box of food or a box of clothing you want to deliver to a family,” McDonald said.
“People have probably seen some of the homeless people we have in town and thought, gosh, I wish I could give this scarf to that guy.”
“We’ll go actively seek those people out. You donate through our webpage or our app and we’ll go seek those people out.”
In fact, the idea originated with one of the organization’s volunteers, who mentioned they had some things they would like to give to a homeless person they knew of but were not sure they could find that person. Other volunteers not only felt they could help out on that front, but decided to expand on the idea.
“So we said, why don’t we offer that to the public? Maybe the public wants to do something somewhere, and sort of follow in those lines,” McDonald said.
McDonald stressed that Secret Santa donations could be anything – food, clothing, ornaments, other items – with the exception of heavy items such as furniture.
Items could also be earmarked for organizations such as Aspen Ridge Lodge or Sombrillo Skilled Nursing & Rehabilitation Center. In fact, nonprofit organizations can go directly to the website or app during that week and specify items they are in need of, anything from blankets to used laptops. Donors can check the website for those needs and donate those items through Famine to Feast.
“So maybe someone doesn’t have someone that they want to directly donate to, but they have this stack of blankets and don’t want them to go to waste, then we would know that this place could take all these blankets,” McDonald said.
Famine to Feast will collect and distribute items from Dec. 16 all the way through the end of Christmas day. Download the Apple app (Android is not yet available) or go tofaminetofeastnow.org to learn more or to make a donation.

We won second place in the county holiday parade! 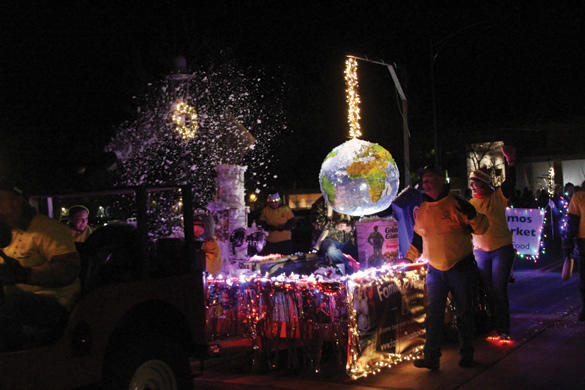 Los Alamos often tops lists of wealthy, high-income towns so it may seem to be the last place where there would be issues with hunger but “food insecurity is very real,” Jaret McDonald of Los Alamos said. His wife, Jen, agreed; explaining food insecurity does not equal starvation but does describe situations where individuals struggle to feed themselves and their families.

As a result, the McDonalds created the 501 c(3) nonprofit, Famine to Feast. They will officially introduce the community to Famine to Feast noon to 3 p.m., Nov. 5 at Ashley Pond Park. The Los Alamos Big Band will provide live music and representatives from LA Cares and the Food Depot in Santa Fe will attend. Free hot dogs will be served.

Jaret, who is a candidate for Los Alamos County Council, emphasized this is not an event for politics. “The day is about awareness (on) food insecurity,” he said.

The organization offers a website and an app for people to donate food to the local food pantry, LA Cares. The app is available through iTunes and the website is faminetofeastnow.org. The way it works is simple: participants enter the food items they wish to donate on either the app or the website and provide their location. The food is picked up, a tax donation receipt printed, and the food delivered to LA Cares. There is a list on the website identifying what can and cannot be donated.

“All people need to do is get on the app, push a button and we’ll take care of the rest,” Jaret said.

The organization has been operating, unofficially, for almost a year. The McDonalds explained they wanted to make sure the website and app worked properly and that the funds were in place before officially starting.

“We wanted to make sure we had our stuff together,” Jen said.

A group of volunteers from the community helped ensure Famine to Feast got off the ground. Volunteers include Tanya Sprouse-Mosley. “She’s been such a huge part of our organization,” Jaret said.

Numerous businesses in the community also have financially contributed to Famine to Feast including Zia Realty Group. Additionally, the organization has caught the attention of Lt. Gov. John Sanchez. Jaret said Sanchez has been involved in the organization since its inception and has been very supportive.

The organization is not just gaining attention on a state level but on a national one, too. Jaret said they are hopeful the organization can move to other areas, which have shown interest in the program, including Portland, Ore., El Segundo, Calif. and Austin, Texas. They also hope to have the organization operate in Santa Fe and Albuquerque.

“We’re hoping it will be even more favorable when we officially launch. We hope more people get involved and get engaged,” he said.

To spread awareness, Jaret said flyers will be delivered to every door in Los Alamos describing the organization and the Nov. 5 event. Also, they hope to distribute Famine to Feast magnets.

Jaret McDonald, Jen McDonald and Tonya Mullins with a truckload of water and other 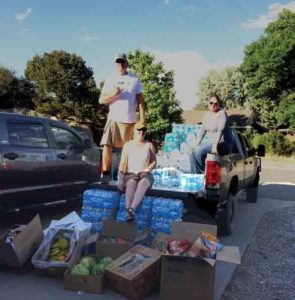 items collected today for the firefighters battling the Dog Head Fire. ‘Los Alamos has proved once again to be an amazing community. With very little notice, Famine to Feast was able to collect an overflowing truckload of bottled water for the firefighters supporting the Dog Head Fire. We are humbled by the support from the community,’ Jaret McDonald said. ‘Your donations give this NPO purpose and prove that neighbors can help neighbors, even if we are not from the same town. We all know way too well the toll from a fire. We would like to give special thanks to High Altitude Athletics for providing numerous gallons of water, fresh fruit, chips, cookies and candy. As well as Dan Levings from Smith’s in White Rock for stepping in and providing water for a worthy cause. All funds collected today also will be donated to the Red Cross to aid in their assistance to this fire. Another special thank you to Tonya Mullins for helping Famine to Feast arrange and gather pickups for this cause.’

Jaret McDonald of Famine to Feast in Los Alamos presented a talk this morning about his nonprofit organization to members of Self Help, Inc., Los Alamos Police Department, Los Alamos County Social Services, First Born, Los Alamos Retirement Service, JudyGails Place and the Juvenile Justice Advisory Board. McDonald and his wife Jennifer founded the organization designed to help people with extra food connect with those in need of food. McDonald, a candidate for county council, presented his talk in the upstairs conferance room at Smith’s Marketplace.

The IRS has approved our 501 (c) (3) status. We just received notification today. Our effective date of exemption is 10/14/2015. That means all of you that donated last year until now can deduct your donation!!!!!  We will have a news letter come out this weekend. Thank all of you who have helped us get this far! 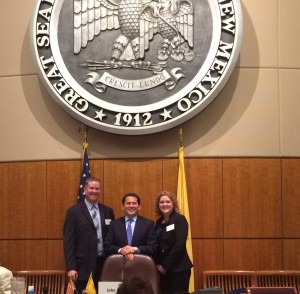 Last week Jaret and I had the honor of being special guests of Lieutenant Governer John Sanchez at one of the NM Legislative Sessions, where we were introduced to the Senate on behalf of Famine to Feast. We are so pleased the word of this organization is getting out! Thank you for the support! 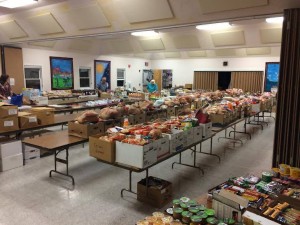 . I spoke with some of the volunteers and we “guesstimated” there is 7,000 lbs. of food in this room that will all be gone within 24 hrs. LA Cares does each month, sometimes feeding over 100 families. Los Alamos doesn’t necessarily have a homeless problem but a legitimate food insecurity problem. Here are some quick thoughts: Los Alamos has a population of approximately 18,000 residences and has about 9,400 mailing addresses (including businesses and PO Boxes). That means in order to give LA Cares approximately 7,000 lbs. of food each month, each family would only need to contribute about ½ of a pound of food each month. We feel this is a small request, considering that the USDA reports that we waste approximately 4 out of 10 lbs. of food. Please support us as we get Famine to Feast ready to launch. We are currently trying to raise $5000 to be able to send a refrigerator magnet to each mailing address in Los Alamos County.